As promised to myself, I am writing an entry on how me and my husband met and eventually became lovers.

July of 2011 when we first met. It was, as I can recall, just an ordinary saturday booze night, I decided to meet with my bestfriend Jen at Cubao Expo after my meet up with my college barkada. Jen was with her boyfriend and her boyfriend’s bestfriend “John”, plus another friend whom I can’t recall. Ofcourse I wouldn’t notice John because I was at that time in a relationship with my former boyfriend of 6 years. Hehe. I may have not notice him, but I can recall how he managed to start a conversation with me:

*After we were introduced*

Me: *popopoker face* While saying to myself, daldal naman nito

Then we cap off the night after some few drinks. Days later, someone’s adding me on Facebook which I did not immediately approve because he was not familiar to me until Jen messaged me with a “Uy approve mo daw si John sa friend request niya”. That’s when I realize he was the John I met the other night.

2014 came. It was one of my most challenging year. Quarter life crisis at its best, dreaming of so many things and losing interest with the relationship I took care of for almost 6 years. 2014 was a disaster. Dreadful. And confusing. July of 2014 when I finally decided to end that 6 years bond with my former.

August of that same year, 2014, I received a text message. It was John.

I had too many “Pass and Next Time nalang”, I always end up rejecting his invite.

As I can recall, the sequence of event flowed with one encounter every month, as in hindi ko nilagay sa isip ko na pwedeng magustuhan ko siya, I was deeply obsessed with someone during that time. Nagpapakabaliw ako noon sa isang tao nun, nagpapakahopeless romantic ako nun. So October came, and yes we had an encounter at Jen’s house, they invited me to drink, and when I arrived there it was a surprise that John was there. Na-inis pa nga ako bat sya andun haha.

November 2014 was Bop’s birthday, we we’re there, they are teasing us, but I pretended deaf. Haha.

No encounter on December 2014.

Came year 2015. I was still a bit confused with what’s happening with my life.

January 2015 Jen invited me to celebrate with them their birthday at Baler for the next month(February), I said yes because all I wanted to do that time is to breakfree from everything. Breakfree most specially from that date which marks our supposed to be 7th year.

I was about to reject the invite, and decided not to join them because I lack budget. Haha. Polca’s maintenance is scheduled so I have no choice but to cut my budget from that event. NOT UNTIL:

Well, our “real” friendship started in Baler. That’s the reason behind our Surf/Sea inspired wedding. Anyway, yup I started to see this “makulit” person into someone I can “trust” person when we were in Baler. He was all the time madaldal as usual. And a little pasweet. Haha.

When we were on our way to Baler, I was asleep the whole time and was surprised that he lend me his pillow, nagulat nalang ako na nilalagay niya yung unan niya sa gilid ko kasi nauuntog ako.

Trivia: We were sleeping in one tent. And guess what? Hindi siya katulad ng iba na magtatake advantage sayo. He even took the time to get my jacket while I was sleeping near the shore because I was nilalamig daw. That’s why, Baler has a special place in my heart because that’s where our friendship started.

When we were back in Manila, our friendship continued and we had constant communication. I was often invited by him or by his Sister Kaye to join them with their drinking sessions and tambays. We watched him in his drag racing competition, he invited me to watch Banana Split live and so on…

Then we get used to one another and finally decided to take the chance:

And then he became so clingyyyyyyy:

And then I am suddenly caught off guard and defenseless, kailangan ko na amining nabihag na niya ang puso ko. It was a bit hard before I finally admitted that to myself because there are a LOT of barriers. BUT I lifted it all up to the one above, I know he wants me to be happy and to learn a lot from this man, just like what I am experiencing now. 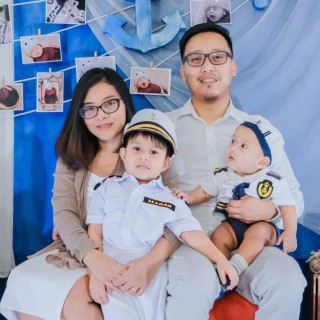 Hi I'm Sky and it rhymes! I am a happy wife to a crazy husband. A breastfeeding, sometimes OA and devoted Mother of JK and JS. I used to be a full time corporate slave and now a full time Work-at-Home Momma who enjoys doing art and craft. I have this little dream to be an inspiration to the world through God's will which is why I pursued this mini online space. I am a hungry learner and always strive to challenge myself and do more. I am definitely a work-in-progress striving to master the beauty of being a Mama, being a wife and a better person. Welcome to my space 💙

May I help you?